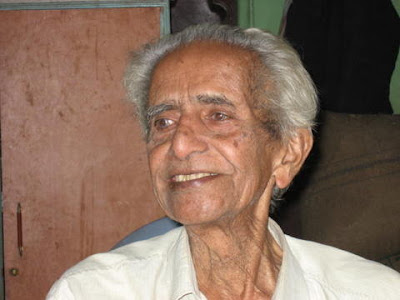 Shri K. B. Kulkarni was fondly known as “KB” by all his disciples, near and dear ones. KB was born in 1920 in Belgaum District.

Born on 4 February 1920 in Hindalga, he completed his schooling from Benon smith high school in 1937. He started teaching in St.Pauls High school from 1949.

He was a student of Haldankar’s Art Institute and later became an Art Teacher. He has done Drawing Art Teacher certificate course from Sir J.J. School of Art , 1945. He was also on the Advisory board for Art Education of Karnataka. He was also a member of Karnataka State Lalit Kala Academy.

He was awarded State Award in 1972. KB started an Art Institute called ” Chitramandir” in 1951  at Khade Bazar and conducted regular classes till 1977. He also taught at St.Pauls High school Belgaum.

KB had devoted himself to art and teaching of art and also in painting. A whole generation of artists have been trained and nurtured by him. His own works truly represented his mastery over oil, water colour and nature, as well as human figure. For him art of paintings was a mysterious activity. In his words –“ Though it is often said that art is a visual poetry, I think it is also music, where harmony, balance, rhythm are very important.”

It waa as if there was magic in his hands he used to teach me in St Pauls, and also fire me for untidy drawings as drawing was my worst subject.

Apart from being a great artist ,he was also a highly knowledged person & a good story narrarator. He taught us the basics of drawing and drawing the most complicated drawings. As a student I have great reverence .

i am proud to be his student.

I don’t think anyone else influenced me as much as he did. He came to teach us Drawing; he ended up teaching us about Life and all its varied aspects: Human behaviour, Movies, Art, History, Nature, Astronomy, the Universe, Novels, English, Europe, Anna Karenina, Languages, Acting, Mimickry, Mumbai, JJ School of Art, “We are not Alone”, “The Count of Monte Cristo”; the list goes on…..

Absolutely true..KB Sir was more than just an art teacher to all his students…He was a friend, philosopher and guide. I will always treasure every moment of my time spent with him.

Shri. K. B. Kulkarni was a gr8 artist. He was my teacher at St.Paul's. In fact he inspired me in drawing n painting. Herman.

Shri. K .B. Kulkarni was a gr8 teacher. I am one of the student of sir i like his life painting and landscape its to good. (LOVE YOU SIR )