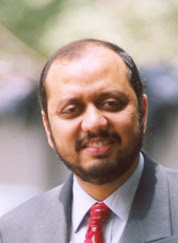 Madhusudhan Murkumbi of Belgaum, MD Shree Renuka Sugars. He has been a Director of ICICI Bank Ltd since January 20, 2006.

While estimating Narendra’s net worth to be 17 billion rupees (Rs 1698 crores). The mother and son duo of Vidya and Narendra Murkumbi have built their billions together with 9,900 cane farmers, who are also shareholders in Shree Renuka Sugars, with registered office at Havelock Road, Camp Belgaum. This is a rags-to-riches story with a twist. Narendra Murkumbi became a billionaire all right. However, he also created wealth for thousands of cane farmers.

Vidya (mother) and Narendra Murkumbi, first-time entrepreneurs, experimented with an asset-light, capital-light business model. They chose to buy old units rather than set up new ones. They chose to lease out factories rather than invest in new facilities. Result: with little capital, Shree Renuka Sugars has become India’s eighth largest sugar company. More importantly, it earns a 46 per cent return on capital employed, the highest in the industry and almost double the industry average of 20-25 per cent. Narendra also spotted a global opportunity when Europe stopped exporting refined sugar and is setting up India’s largest sugar refinery in Haldia.

Shindogi, in the Belgaum district of Karnataka, is like any other Indian village. Most of the inhabitants are farmers. Here they grow sugarcane and their incomes rise and fall with crop prices. It is the last place one would expect people to track stock prices. However, they do. They keep a close watch on the fortunes of Shree Renuka Sugars (SRS). After all, 9,900 farmers in the region own the stock and their combined shareholding is worth around Rs 350 crores.
Take Raiappa Mallappa Kalti. In 2000, he used to ride a bicycle, grow maize on his 40 acres, and make about Rs 1 lakh a year, which barely covered his farm and family expenses. After the SRS plant came up, he switched to sugarcane. He sells his crop to SRS and paid within 15 days. Says Kalti: “I drive a Tata Indica now, have increased my holdings to 100 acres, and make Rs 20 lakh-30 lakh an acre.”
Narendra was born in Belgaum. His father, Madhusudhan was a distributor for Tata Tea and Tata Chemicals. With him, Mr.Narendra travelled a lot. He saw the tea gardens of Assam and the wheat fields of Punjab. In 1994, when he graduated from IIM, Ahmedabad, he wanted to start his own agri-business. He dabbled in bio-pesticides, but soon his interest shifted to sugar.

Mr. Narendra M. Murkumbi, has done his graduation in Electronics and Communication Engineering from the Gogte Institute of Technology, Belgaum.He completed Post Graduate Diploma in Management (PGDM) with specialization in Entrepreneurship and New Venture Management from the Indian Institute of Management, Ahmedabad in 1994.
Having lived in Belgaum for most of his life, (now he stays in Mumbai) Murkumbi was familiar with the business. He did not have the Rs 100 crores needed to set up a mill. At that time, the Andhra Pradesh (AP) government was selling a sugar unit for Rs 55 crores. He wanted to buy it and bring it to Belgaum, which grew lots of high-yield cane. But he did not have the cash to do even that.

There was oversupply of sugarcane in the district. Farmers were traveling 60-70 km to sell their produce in Raibag. There were payment delays and defaults. By setting up a plant in Belgaum, SRS would step up cane off take and make prompt payments. In return, each farmer would have to buy at least 500 SRS shares at Rs 10 each. Not everyone was convinced. Most invested only after they saw the mill coming up. In the end, 9,900 farmers bought the story and the stock — the latter, in many cases, with borrowed money. That was SRS’ defining moment.
Since then, Murkumbi has turned the company into a fully integrated sugar maker with power generation and refining capacities. It has also become a major merchant exporter of sugar and is setting up a 2,000 tonnes per day sugar refinery in Haldia — the largest in India — primarily for exports.
He has also been a member of Government of India’s committee for promotion of sugar exports. SRS has set up a subsidiary company, Shree Renuka Energy Ltd for further investments in the power generation business.
The company has strong expertise and track record in implementing power cogeneration plants in sugar mills and plans to tap additional potential. Shree Renuka Sugars, together with its subsidiaries, manufactur

Another Star of Belgaum making us Proud.