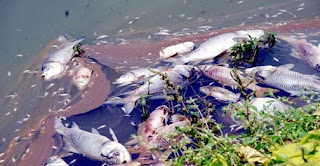 Fish were found dead in large numbers at the Kote Kere (or Fort Lake) here on Thursday. According to an estimate, nearly 10 tonnes of fish died in a period of just 24 hours since Wednesday. However, there were no fresh cases of death reported on Thursday.

The common carp (Cyprinus carpio) is the main variety of fish found in this lake. Yet, the Belgaum City Corporation, which had handed over the management and maintenance of the lake to a private contractor, has not informed the Karnataka State Pollution Control Board (KSPCB) of the reasons for the disaster. The KSPCB has been monitoring water quality and other environmental aspects in and around the lake on a monthly basis.

One of the reasons could be due to the drop in dissolved oxygen level. A KSPCB official said that he had come on his own after one of his friends informed him about the incident in the morning. However, there was no information from the corporation. Fish start dying due to suffocation when the dissolved oxygen level in the water drops. In addition, there was no adequate harvesting of fish since more than a month because of Sravanamasa when all Hindus avoid consuming meat. The 10-day Ganeshotsava follows Sravanamasa.

Therefore, there was an apparent growth in the numbers of fish in the lake demanding more oxygen. Apart, the weather had been cloudy since about a week that also adversely affected the oxygen level.

Thanks to [email protected]   for posting it first here on this blog on the chat box.
See original story on The Hindu