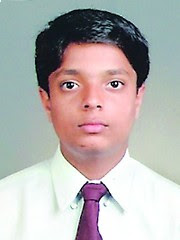 Srinivas Ashok Dharoli (16), a student of the Jain College here, was killed in a road accident near Shagun Garden Khadarwadi Cross on Belgaum-Khanapur Road on Tuesday. He fell off the motorcycle he was riding after it skidded when he tried to avoid a cyclist. He suffered head injuries and died on the way to hospital. He survived by his father, two brothers, and one sister.

The worst part of this accident is that when he fell down on lookers did not have the humanity to pick him up and send to the hospital; instead, all were just seeing him die. His head had hit the handle and due to this, there was internal bleeding and heavy bleeding from his nose and mouth. When a group of Jain college students saw him then he was picked up and on his way to the hospital he died.

He was a very good student and a very good cricketer. Now that he no more, his parents and friends must be asking this question “IF HE WAS IMMEDIATELY TAKEN TO HOSPITAL HE COULD HAVE BEEN SAVED”

This is a rather sad scene all over India, whenever there is an accident no one tries to take the victim to hospital fearing the Police enquiries. This is some what true but this could happen to anyone and if at that time also no one comes up to Save Then What?

The Supreme Court has ruled (Case No: Appeal (Civil) 919of 2007 Date of Judgment: 23-02-2007) that all injured persons especially in the case of road traffic accidents when brought to a Hospital have to be offered First Aid, stabilized & shifted to a Government center if required. It is only after this that the Hospital can demand for payment or complete police formalities. Incase you are a bystander and wish to help someone in an accident, please go ahead and do so. Your responsibility ends as soon as you leave the person at the hospital.
The hospital bears the responsibility of informing the police etc.

An accident could happen to any one. It could be you one day. Lets make a promise “We will help anyone in a road accident by getting him to hospital and we will not be a bystander alone.”