The intervention of the Karnataka police brought the situation under control at Hindalga where a homage paying ceremony was organized in the memory of those killed on June 1, 1986   in the agitation against the Karnataka Government’s ‘Kannada Sakti’ which was organized by the Maharashtra Ekikaran Samiti. 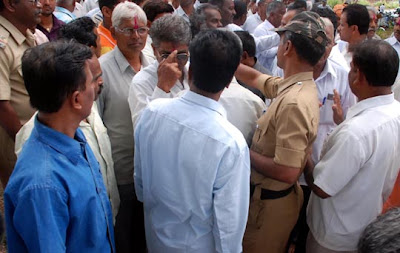 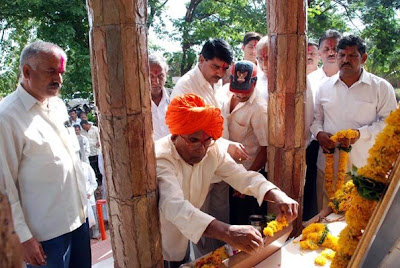 The MES had organized a homage paying ceremony today at Hindalga. The internal spat within the Samiti between the City Samiti and Taluka Samiti came to the fore front.  Already there are two factions in the MES, one is led by Kiran Thakur and other is led by N D Patil. Both the factions paid their respects to the martyr’s in two different functions. There was a verbal spat between the Maloji Ashtekar led faction and the Deepak Dalvi city faction. The Taluka samiti leaders were alleging that the City samiti were not working actively.

Maloji Ashtekar said that 3 Marathi news papers should act in a manner in which the border issue is highlighted in a nicer way. He added that competition should be kept aside and the cause for Marathi should be taken up first by the Marathi media.

I read ur comments… N felt to express my feelings too…
Belgaum is my home town… Marathi is my mother tongue, m married to Kannada guy… N nw we speak both Kannada n Marathi… Not only Kannada or Marathi but Hindi English n other languages… M proud to be maratha… As well as I respect Kannada ppl… M happy in my life!! What matters is our thinking n behavior… Marathi ppl thinks dat Kannada ppl r fights a lot… N Kannada ppl thinks dat Marathi ppl fights a lot…! It’s not a joke… M just telling u ppl the fact…

One thing I observed n experienced dat Marathi ppl r proud to be Hindu… N Kannada ppl proud to be Kannada… Kannada ppl don’t give much respect to Marathi ppl… Y?? As I m a good gal… I made place in everyone’s heart but still some ppl force us to spk only Kannada… N the greatness… If we think of Bgm… Don’t u ppl think that even we have right to spk in our mother tougue?? I don’t understand whether to wear black dress n go for protest on 1 st November… Or to celebrate rajyotstava??? Many ppl ll be sad at dat time… Many ppl ll be dancing… What Marathas want?? Just some respect… N basic needs for their mother tougue?? I had went for Marathi muk morcha n also going for lingayat coming morcha… I attend both bcoz I respect both the religions… These ppl r fighting just for der rights… We have to support both…!! Y Karnataka government ll not listen to maraths… Wt they r asking only giving respect to their mother tougue… If Karnataka government ll do this… All ll be happy in Bgm only… I feel dey Should give der right on 1 st November only so dat everyone can celebrate the same day n live peacefully in Bgm feeling proud on Karnataka….

there is no dispute basically, belgaon is of marathis and marathi are an integral part of maharashtra, not only belgaon but karnataka and some parts of dharwar district are also of marathis majority, now we the people of this issue can not and should not depend on politicians of maharashtra, not at all, are nothing but CHAPLUS OF CONGRESS and remaining are good for nothing and have no identity outside mumbai. even our presiden is a marathi, many ministers in centre are marathi, but they fear that if they speak somethimg like kannadinda leaders their high command will throw them out……………. they can not talk for the cause which is the capital of state then how can we expect them to talk for border issue. because of them only this situation has arised……..god will not spare them and we will not belive them anymore, we need to fight by our own now and our leaders need to take lesson from TELANGANA leaders jai hind jai marathi people

Hey Mahantesh,
It was very wrong on your part to claim these guys as culprits. U do not have any rights to claim so, until U know about what they have done or not. But U always have a reason to get angry on these politicians who use these sentimental thing as their weapon to come to power.

I keep reading your replies, and you are a pro-kannada guy and not a Belgaum guy. And last but not the least U claim URself as an Indian.

My question is what have U done for Belgaum or India?

If at all everything would have been good in past, these guys would not have tried doing this kind of Morcha and getting killed. Dude, there could be a mistake from Kannada guys too. Hence this fight. I do not know, but just saying it could be 🙁

I am not supporting Marathi nor Kannada. But whatever U said abt the is absolutely ****. U R not a saint to call others something.

My question is, what have U done to UR Marathi guys who live with U in the same place? Just think over it. U need not give me your thoughts.

as far as my knowledge serves me , itz always the innocent who r killed , therez no doubt that they created a prbm then , but u need to take a deep perspective here , i say innocent bcuz their thinking was tampered by these so called leaders , they were not guided by proper ppl .these ppl were purely used by these selfish leaders to serve their purpose . U might even argue saying that how could they be so immature to be fooled , i say that there r always ppl who dont think on the same line as v do . Neways Mr mahantesh it was nice having some kind of debate with u .

Guys Believe me there are prblems both the sides, so instaed of spiliing rubble on each other , We the youth should not dig grave and think for Future for Belgaumites unity , not on Langauge or any petty issue , Yes it should be devlopemnt and peaceful life for both Kannada and Marathi brotherns, We Belgaumites must take the Onus of Unity and peace and we, common Sachin and Mahantesh, just rubble it up its all history, Guys digging grave would just stink, Let You both and Me and evey belgaumite think of what next and where should we go from here

the dead were all those who created voilence n intrupted the silence of our mother town belgaum,nothing deffers when such voileters die….

dont call them innocents…….. my town is suffering n facing so many laggings because of these so called innocents,,,,,,,,,, hope u understand……….

It seems Mr Mahantesh has no idea of what i have written , but still since i understand what hez written i am happy that he beleives in the same values that i do & regarding the fact that whether i am an Indian or not is nobodys business to judge .

MR sachin hope u r a Indian,,,,,,,,,,
for ur kind information those who were killed in firing in 1986 june 1 are all those who created the voilennce in our city where we still believe that both kannada n marathi are living happily, such people are nothing but those who try break my united India, most of the time i feel unhappy because of all those marathi people who just fight for state border n never does n anything when it comes for the national border, they are just cowards, if u have real pride on the country then come join hands together n lets fight for the nation, nothing great achieved when some one fights n get killed on a state border. if u have real proud then do something for the country rather fighting inside our own home, dude whatever it is either karnataka or maharashtra its just our mother land. think of the nation first. remember this internal fight between us Indians gave a chance to British to rule us for 350 years……..

IF U FIND OUT THE LIST OF MARATHI PEOPLE WHO JOINED ARMY FROM BELGAUM MORE THAN 95% ARE MARATHI SO U CAN,T COMMENT THAT WHAT MARATHI PEOPLE FOR NATION?

Fantastic ! this is where it had to end ,this is all that these ppl have achieved . innocent ppl lost their lives bcuz of some crap issue & they dont even have the decency of respecting them . Those innocent souls up there must be regreting for having fallen prey to the motives of some selfish ppl .